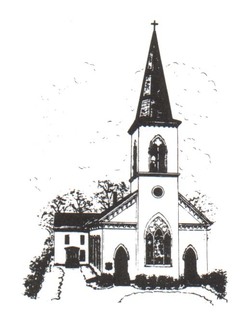 ​The present church building was constructed in 1870, being given and financed by Walter Aiken. This was the first church in Franklin to be built on the “East Side of the river.” Prior to this, all churches were located in West Franklin. In 1875 the church was incorporated and the baptistery was installed. The First Baptist Church was united with The Freewill Baptist Church in 1914. This union formed The Baptist Church of Franklin. In 1919 extensive improvements and renovations were made using many of the stained glass windows from The Freewill Baptist Church. Since that time, this place of worship has been lovingly maintained.

Freewill Baptists met for worship at Lyceum Hall. In May 1869, twelve interested people met in the home of Shadrach Wadleigh to organize the “First Baptist Church of East Franklin”. During that summer Walter Aiken built, at his own expense, the present house of worship.
At the time, the organ was in a gallery at the rear of the church. There was no center aisle and white shutters covered the glass windows. Since there was no baptistery, baptisms took place in the Winnipesauke River near Sulloway Mill. Later a font was installed under the pulpit. While the steeple was being built and the cross raised, two schoolboys climbed on the staging and carved their initials on the cross, necessitating the removal of the cross to plane off the letters and replace it.

The Missionary Society and the Ladies’ Circle were organized in 1870 and the first Pastor, Rev. Benjamin Wheeler, was called and ordained. The new church was dedicated. In 1871, Walter Aiken, with his usual generosity, presented to the First Baptist Society, the meeting house and the land upon which it stood. The second minister called was the Rev. Joseph Fielden, highly qualified, was ordained in and served with distinction his first church for six years. During his term the church membership increased, with many baptisms being performed. Rev. Fielden was the father of our beloved Deacon Clarence Fielden, a faithful servant.

In 1893 extensive renovations were accomplished, with the help of a bank loan, which was paid off with funds from gifts, special collections, subscriptions, pew rents, etc. The vestry and parlor were raised to the same height as the sanctuary. The gallery was removed, pews were moved to make a center aisle. The baptistery was installed in its present location. Classrooms were constructed in the vestry and a heating unit installed. A period of growth and renewal followed.

Again in 1908, more improvements were necessary. The beautiful painted scene behind the baptistery was added, the church shingled, the three arches in the front of the sanctuary built and new lighting installed. During this time of upheaval, the Freewill Baptist whose church was located almost across the street (the gray apartment complex) invited the congregation to worship with them. This resulted in a close, congenial relationship.

For some time suggestions were made about the two churches becoming one and in 1914, after both churches voted unanimously, this unity was accomplished. The church formed and then called themselves The Baptist Church of Franklin. The large windows now in the sanctuary came from the Freewill Baptist Church. This momentous move proved to be blessed and the church grew in spirit and numbers.

In 1973 the rapid growth of the Sunday School called for more room, so the basement was excavated and four new classrooms added. Since then, pastoral living quarters, also known as the Parsonage was donated to the Church, being a blessing and added responsibility.
​
Our Church building is an old soul, but beautifully made. Like most old buildings, including the Parsonage, as the years weathered on and increase wear occurred the Trustees and its members have had to conduct many infrastructure and cosmetic repairs to both buildings.

The great Lord has blessed us several times by receipt of endowments that assisted with the continued operations of our Church and buildings but as church numbers fluctuated from strong and prosperous to the decreased of numbers, our small congregation and members continued to struggle financially and physically to support our church properties.

With prayful and thoughtful consideration of finances, continued upkeep, and the church’s active membership, the previously donated Parsonage was sold in 2014 and monies were designated to be utilized for Capital Improvements to our Church.